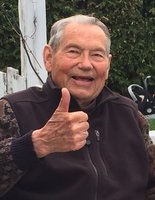 With heavy hearts, we announce that Sloan Watters of Arnprior passed away peacefully at the Arnprior and District Memorial Hospital with loved ones by his side on Saturday afternoon,  June 10th, 2017. He was 91. Beloved husband and best friend of Elaine (nee Dimmell). Dearly loved and respected Dad of Jim Watters of Orléans; Marjorie Vallée (Charles) of St. Andrew’s West and Bill Watters (Patricia) of Kinburn. Proud Grandpa of Patrick Vallée (Lesley), Andrew Vallée, Catherine Watters, Tessa Watters, Eily Watters and Great-Grandpa of Chloe, Desmond and Emmett Vallée. Dear brother of Janet Breen (late Maurie) of Ottawa. Predeceased by his parents: Charles and Katherine (nee Young) Watters; 2 sisters, Audrey Owens (late Nick) and Toots Manchester as well as 2 half-brothers: Edward and Vincent. Fondly remembered for his kind and genuine demeanor, Sloan had a love and respect for the outdoors that stood out among his many fine qualities. His integrity and commitment to family and friends earned him the respect of all who knew him. He will be missed. Family and friends were invited to pay their respects during visitation at the Pilon Family Funeral Home and Chapel Ltd., 50 John Street North, Arnprior on Tuesday evening, June 13th from 7 to 9 pm.  A Funeral Mass was celebrated in his beloved St. John Chrysostom Church, Arnprior on Wednesday morning, June 14th at 11 o’clock. Cremation followed with interment in New Liskeard, Ontario at a later date. In memory of Sloan, please consider a donation to the St. John Chrysostom Church Memorial Fund.