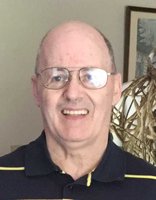 (Retired – General Dynamics, Ottawa) Following a long journey through Alzheimer’s, Alex passed away peacefully at the Elisabeth Bruyere Health Centre, Ottawa on Sunday evening, July 5, 2020. He was 80. Beloved husband for over 57 years of Catherine (nee Savage). Dearly loved father of Frank (Lynn Grinstead) and Helen McKinlay. Cherished and proud “Grandpa” of Madison and Jack McKinlay. Dear brother of the late Jack McKinlay and Jean Wylie (late George). Lovingly remembered by several nieces and nephews. Alex was born in Scotland, the youngest son of the late Alexander and Helen “Ella” (nee Shearer) McKinlay. He met the love of his life, Cathie at a friend’s birthday party in 1959. The rest became history. Alex and Cathie wed in 1962 and welcomed their son Frank in 1965 and their daughter Helen in 1966. The family emigrated to Canada in 1972 and settled in Ottawa where Alex worked as a Mechanical Designer at General Dynamics until his retirement in 2010. Alex’s final arrangements have been entrusted to the professional care of the Pilon Family Funeral Home and Chapel Ltd., 50 John Street North, Arnprior where a private family visitation and Funeral Liturgy will take place. In memory of Alex, please consider a donation to the Dementia Society of Ottawa and Renfrew County.