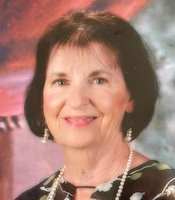 (nee Normand) January 9, 1947 - October 8, 2020 Kay Johnston died peacefully at the Ottawa Civic Hospital on Thursday, October 8, 2020 in her 74th year. She is survived by her loving husband of 53 years Elwood; her children Alicia Laberge (David), Craig Johnston and her grandchildren: Jordana, Alexa and Xavier Laberge. She also leaves behind numerous nieces and nephews. Also survived by her brothers: Marcel Normand (Mary), Raymond Normand (Linda); her sisters: Sally Normand and Jo Ann Normand (Bill). She was predeceased by her parents Beatrice Normand (nee Parisien) and Rosario Normand, as well as her brother, Robert Normand (Sharilyn) and sister, Norma Normand. Kay was born in Kingston, Ontario. She loved teaching children as a park supervisor in an underprivileged section of the city. The children loved her and often invited her to lunch in their homes even though they had little to share. Following her life's ambition, she attended Peterborough Teacher’s College at the age of 18 years. She began her teaching career at Holy Family Catholic school in Kingston, a career that lasted 35 years. In 1971 she moved to Ottawa and began teaching in the Ottawa Separate School Board and later the Carleton Roman Catholic School Board. She obtained her degree from Carleton University by attending night courses and several approved summer courses offered by the various Boards. Kay retired from teaching in 2000 after 35 years to join her husband who was posted to Australia for a year to assist in security for the 2000 Olympics. Within days of her arrival in Sydney, Australia, she landed volunteer positions with the Sydney Hospital and the Sydney Museum (children's section). Most recently Kay resided in Arnprior. She loved the walking trails and the close-knit atmosphere of a small town. Kay loved golfing with her new buddies in Arnprior and they miss her dearly. She also loved participating in the Seniors activities and in particular the yoga classes. Of course, she continued to volunteer by delivering meals to shut-ins for the Seniors At Home Program for almost eight years. She was also very generous in her support of numerous charities, namely Seniors at Home, Arnprior Food Bank, The Salvation Army, The Ottawa Mission, Red Cross and CHEO. She attended Saint John Chrysostom Church in Arnprior. Kay’s final care and arrangements have been entrusted to the Pilon Family Funeral Home and Chapel Ltd., 50 John Street North, Arnprior where private family visitation will be held. Extended family and friends may join us on their electronic devices for a Webcast Funeral Service to be conducted in the Pilon Family Chapel on Tuesday morning, October 20th at 11 o’clock. Private inurnment, Albert Street Cemetery Columbarium, Arnprior. For those wishing, a donation to any of the charities mentioned above would