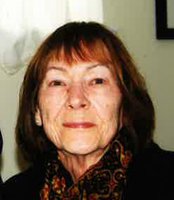 (nee Casey) With sadness the family announces that Peggy passed away peacefully at the Arnprior and District Memorial Hospital in the early morning hours of Thursday, April 1, 2021; Peggy Doris Sbrozzi of Arnprior was in her 93rd year. Beloved daughter of the late Simon and Isabel (nee Dolan) Casey formerly of Fitzroy Harbour. Dearly loved mother of Ely (Sunday) of Kingston and grandmother of Xavier and Chloe. Special aunt of Laurie and Tracey Telgen. Dear sister of Charles Elbourne. Predeceased by 2 brothers: Andrew Casey and Eric Casey (Johanna Telgen). Peggy was a longtime hairstylist in Arnprior. In her later years, she volunteered as a hairstylist at the Arnprior Hospital bringing joy to the many patients she helped along the way. She was also a longstanding member of the Ladies Auxiliary at the Arnprior Legion. Peggy’s final care and arrangements have been entrusted to the Pilon Family Funeral Home and Chapel Ltd., 50 John Street North, Arnprior. In memory, please consider a donation to the Arnprior Regional Health Foundation.