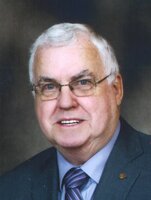 (Retired – BASF, Arnprior) With great sadness, the family announces that on Monday morning, September 6, 2021, Don passed away peacefully at the Arnprior and District Memorial Hospital with his children by his side. Donald Patrick Cornforth of Arnprior was 77. Beloved husband of the late Alison (nee Davis) (November 3, 2013). Dearly loved and devoted father of Christine Herron (Mike Bigelow) of Arnprior and Rob Cornforth (Rose) of Ottawa. Cherished and proud “Grandpa” of Erin Saunders, Brad Herron, Daniel Herron, Zoë, Owen, Violet and Poppie Cornforth. Dear brother of Ken (Mirella) of Toronto; Keith and Brian (Rita) of Ottawa and Mary Blyth (late Dave) of Kitchener. Also survived by nieces and nephews. Predeceased by his parents, Percy and Marion Cornforth as well as a sister, Ann Fitzgerald (Mike of Ottawa). Also survived by many great neighbors, friends and acquaintances. Don was very proud of his years of service with BASF in Arnprior. He was a dedicated ski instructor at Mount Pakenham. He was also a longtime member of the Arnprior Optimist Club where he served as President and volunteered countless hours in the name of our youth. Don also volunteered many hours as a driver with the Arnprior, Braeside McNab Seniors at Home Program. A gentle soul has left our midst. He will be missed. Don’s final care and arrangements have been entrusted to the Pilon Family Funeral Home and Chapel where visitation will be held on Friday morning, September 10th from 9:30 to 11:15 a.m. A Private Funeral Mass will be celebrated in Our Lady of Perpetual Help Church, Braeside followed by interment at the Malloch Road Cemetery, Arnprior. In memory of Don, please consider a donation to the Arnprior Optimist Club or the Arnprior, Braeside McNab Seniors at Home Program.