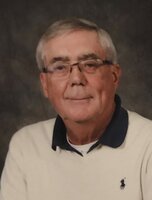 Peacefully on Friday morning, November 12, 2021; Barrie Ross Taylor of Arnprior passed away at the age of 73. Loving husband of 52 years to Janet (nee Clancy). Survived by his children: Barrie (Paula Gerlach and former wife Kimberley), Kirsten (Guy Pelletier), Grandchildren: Jamie (Kortney Hill), Sydney (Britton Dillabaugh), Melanie (Sam Eastman), Callum, Jake, Owen and Rosemary as well as great grandchildren: Chayse and Peyton. Also survived by his older siblings: Nick (Janet), Toby Ross (Mike), Carole Taylor (Peter Oelmann), Deryk (Monique), and younger siblings: Laurie (Judy), Val Thomson (Bruce) & Bryan (Cecilia), as well as his brothers-in-law: Michael, Jimmy (Renée). Predeceased by his youngest son Patrick (Stephanie) as well as his parents: Wilfred and Muriel (nee Wardle), two brothers: Ross and Rick (Mary), and brother-in-law: Jay (Lily). Born in Rosemere, Quebec, Barrie and Janet spent most of their lives in Manotick, before retiring in Arnprior. Barrie was dearly loved and will be missed by many nieces & nephews, extended family and many, many great friends. Barrie’s care and arrangements have been entrusted to the Pilon Family Funeral Home and Chapel Ltd., 50 John Street North, Arnprior where visitation will be held on Thursday, November 18th from 9:45 to 10:45. Family and friends are invited to join us on their electronic devices for a Live Webcast Funeral Service on Thursday morning at 11 o’clock. Interment at Notre Dame Cemetery in Ottawa will follow immediately after the service. In lieu of flowers, please consider a donation to the Arnprior Regional Health Foundation. A link to the live webcast is available just below the "Donations" tab on the left of this page. For those using cellular devices or tablets, please use the arrow next to the "Obituary" tab above to access the live webcast link. A recording of the service will also be uploaded and available after the service.