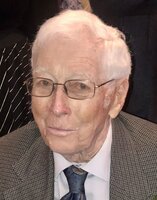 With gratitude for his life, the family of Bill Carss announces his death on March 29, 2022. William Adair Carss was born November 17, 1929 in his family’s farmhouse near Arnprior, Ontario. The youngest of Alfred (Fred) and Auderia (Oddie) Carss’ six children, he had a lifelong close bond with his siblings: Bob; Fred (Gladys); Helen (Ed); Cherry (Glenn); and Cliff (Mary). It was an auspicious year in 1953 when Bill married Mary Armstrong and began dairy farming. Together, they raised three children – Margaret, Donald and Barbara – at Sandy Crest Holsteins. Over the years, Bill was well known and accomplished in the Holstein breeders’ industry. He was a successful exhibitor at local, county and regional cattle shows and was proud that two cows with the Sandy Crest prefix were first-place finishers at the Royal Agricultural Winter Fair in Toronto. He was even more proud that his son, Don, joined him as a partner at Sandy Crest. Bill was also a qualified Holstein judge, served as a national director of the Holstein Association of Canada from 1979 to 1985, and attained three Master Breeder’s shields in recognition of the proficiency and excellence of his Holstein herd. Bill was Master of the Madawaska Lodge of the Ontario Masons from 1976 to 1978 and was happy and proud to see his grandson, Michael Harrower, fill the same role more than 40 years later. He was also a member of the Tunis Shrine and the Ottawa Valley Shrine Club. Bill continued to work on the farm into his 90s – even getting up on the tractor to rake hay one day last summer – and he faced his difficult final weeks with the strength and stoicism for which he was known his whole life. Among his sorrows, he was predeceased by his daughter, Margaret (John), in 1993; his wife, Mary, in 2009; and all of his brothers and sisters. We are very sad to say goodbye to Bill, but very blessed to have had the gift of his vibrant presence for so many years. That includes: his son and daughter, Donald (Jennifer) and Barbara Carss; five grandchildren, Stephanie, Michael (Kendra) and Mark (Julia) Harrower, and Douglas and Scott Carss; and two great-granddaughters, Hadley and Eleanor Harrower. Bill also treasured the devoted companionship of his dear friend, Naydene Depelteau; his in-laws, Gladys and Mary Carss and Hugh, Donnie and Pam Armstrong; his nieces and nephews; and many, many good friends. Bill’s final care has been entrusted to the Pilon Family Funeral Home and Chapel Ltd., 50 John Street North, Arnprior where visitation will be held on Wednesday, April 20th from 2 to 4 and 7 to 9 p.m. and again on Thursday morning, April 21st from 9:15 to 10:15. A Funeral Service will be celebrated in Emmanuel Anglican Church, 287 Harrington Street, Arnprior on Thursday morning at 11 o’clock followed by a reception in the Carlton Reid Memorial Hall. Interment St. Mark’s Anglican Cemetery, Pakenham. A Masonic Service will take place at the funeral home on Wednesday evening at 6:30. In memory of Bill, please consider a donation to the Ontario Holstein Dairy Youth Trust Fund or the Arnprior Regional Health Foundation.