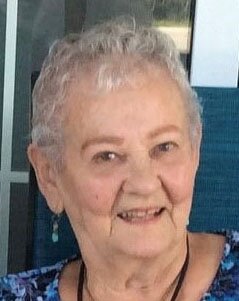 With heavy hearts yet grateful for a life well lived, the Clouthier family announce that Rita passed away at the Arnprior and District Memorial Hospital on Saturday morning, July 23, 2022. She was in her 87th year. First and foremost, Rita was a devoted Mom to Bobby (and his wife Cathy), J.P. and the late Marc (2016). She will be lovingly remembered as “Nanny Rita” by her 6 grandchildren: Angela Clouthier (Katie Kline), Derek Clouthier (Jamie Croft), Danny Clouthier (Vicky Bonin), Courtney Clouthier (Alex Aroz), Adam Redpath (Katie Bilson) and Sean Christopherson as well as her 7 great-grandchildren: Bella, Lyla, Ryder, Deacon, Mia, Jace and Amelia. Daughter of the late Archie and Catherine (nee Scott) Currie, Rita was also predeceased by her stepfather, Leonard Gilmette. Dear sister of John Currie (Bonnie), Mary Blimkie (M.J.), Michael Currie (Diane) and Annette Dupuis (John McNulty) and stepsister of Earl Gilmette (Roxy) and John Gilmette (Carol). Predeceased by 3 sisters: Doreen Duncan (late Doug), Caroline Currie and Eileen Currie as well as a stepbrother, Edward “Buddy” Gilmette (Fran). Rita will forever be remembered as “one of the family” by the extended Clouthier clan. A community minded spirit, memories of Rita will bring many back to her days establishing and working with Arnprior’s “Share a Gift” Christmas efforts. Along with several others, Rita formed and managed the Arnprior Breast Cancer Support Group. Other than raising her family, Rita’s greatest accomplishment may have been her continued and tireless contributions to the annual success of the Terry Fox Run…a charity she so willingly gave of herself to every year. In 2006, Rita was honoured to receive the Town of Arnprior Citizen of the Year Award. A true community spirit has gone to rest. She will not be forgotten. Rita’s final care and arrangements have been entrusted to the Pilon Family Funeral Home and Chapel Ltd., 50 John Street North, Arnprior where visitation will take place on Thursday evening, July 28th from 7 to 9 p.m. and again on Friday from 9:45-10:45. A Funeral Liturgy will follow in the Pilon Family Chapel at 11 o’clock. The service will be webcast live for those unable to attend. Interment Malloch Road Cemetery, Arnprior. In her memory, please consider the Arnprior Regional Health Foundation or the Terry Fox Foundation.

Share Your Memory of
Rita
Upload Your Memory View All Memories
Be the first to upload a memory!
Share A Memory