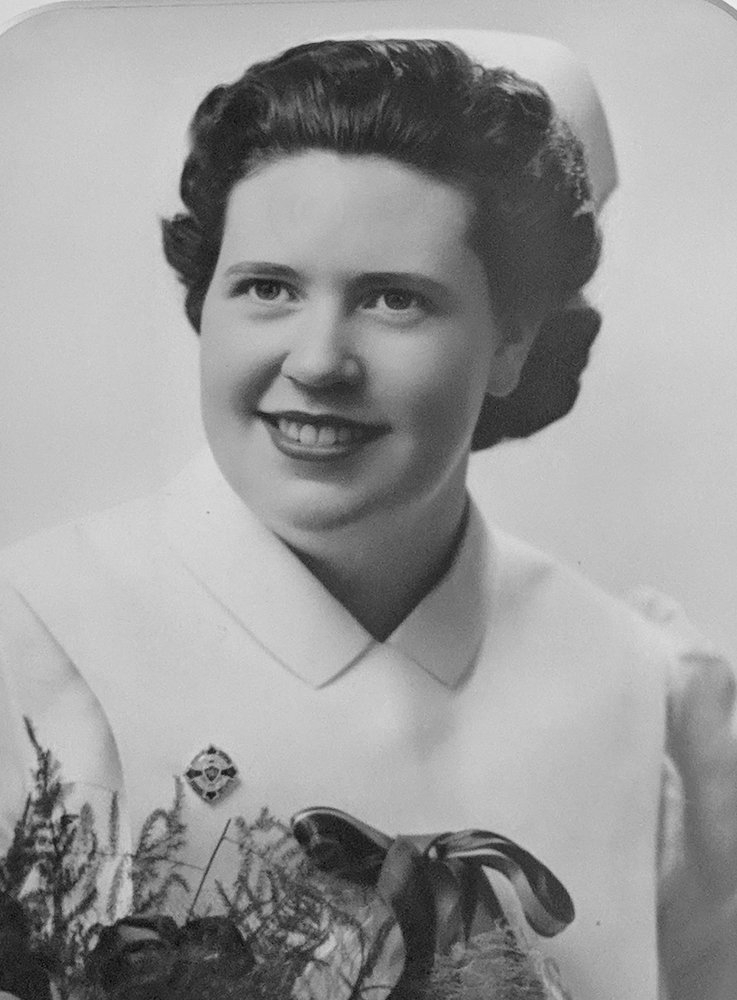 Her warm and welcoming smile touched everyone who knew Marjorie Jean Daechsel (née Loucks). The memory of that smile will endure following Marj’s peaceful passing, in her 94th year, on April 12, 2019 at the Ottawa Hospital, Civic Campus with her family by her side. The family is very grateful for the compassion shown by the staff of the Civic’s Intensive Care Unit and the personal support from close family friends Dr. Larry and Dr. Tammy.

Marj was born in Windsor Ontario, on July 25, 1925, to Catherine (née Barber) and Rufus Loucks. Throughout her life, Marj was very close to her sister Norma and Norma’s sons Ken and Wayne (Nancy) as well as her “adopted” daughter Sharon (Ron). While Marj spent virtually all of her adult life outside of Windsor, she always referred to visiting “Sister”, who remained in their native city, as “going home”.

While Marj’s childhood was full of love, it was also challenged by the untimely deaths of her father, when she was 7, and of her mother, when she was 16. Thanks to the encouragement and support of their family doctor and her own determination, Marj was able to fulfil her dream of becoming a nurse.   After graduating from the nursing program at the Grace Hospital in Windsor, in 1945, Marj went on to pursue her career in Windsor, Montreal, Smiths Falls, Pontiac Michigan, Kingston, Trenton, Englewood New Jersey and finally Ottawa. Other than a stint in the Blood Clinic in Kinston, Marj spent her nursing career first in the operating room and then the delivery room.

It was in Smiths Falls that Marj caught the eye of a young man, Werner Daechsel, who she thought was in the operating room to change a light.  In fact he was a  student working at the hospital to make ends meet between degrees.  The two dated as Werner returned to his studies, completing a degree in Hospital Administration at the University of Toronto. In 1951, they were married in Rockport, New York by Werner’s father, a Lutheran minister.

Their marriage was a loving and devoted partnership that lasted 68 years, to Marj’s last breath. They first settled in Kingston where their three children Hugh, Kip and Ann were born, each roughly a year apart of the other. They then moved to Belleville, where Werner served as the Hospital Administrator for the local hospital. In Belleville Marj led a Sunday school class at the Unitarian Fellowship in which she arranged for her students to visit and understand the faiths of other churches in the community.

Marj and Werner’s next, and most adventurous move, was to Leonia, New Jersey, just across the river from New York City.  Werner pursued graduated studies at Colombia while Marj returned to her nursing career in the operating room of a New Jersey hospital. After two very enjoyable years in the United States, the family moved to Ottawa. Soon after, Marj started the next phase of her career in the delivery room of the Ottawa General, where she remained full time until the age of 65 and three more years, on a part time basis. In addition to helping bring many babies into the world, Marj made some very good friends at the General. Marj then made a career change, serving as the Returning Officer for Ottawa West Nepean for two federal elections.

Marj and Werner’s home was always a welcoming place for their children’s many friends, including Bobby, Larry, Marg and Darlene. The family expanded with the addition of daughters-in-law Rina, Pina and Ewa and of grandchildren - Rebecca, Thomas, Stefano (Emma) and Marco (Cheryl). Marj was the personal birthing coach for three of her four grandchildren.  Thanks to Stefano and Emma, Marj was on track to become a great grandmother this summer. Marj often remarked how grateful she was for her family.

In her rich and varied life, Marj touched many people with her good humour, unshakable optimism, resolve in the face of adversity and calm in the face of crisis.  Family and friends honoured Marj with a Celebration of Life, at the Frist Unitarian Congregation of Ottawa, 30 Cleary Avenue, on Sunday May 19th, starting at 2:00.  The day before, Marj will be laid to rest in her family’s plot, at White lake Ontario with a private ceremony.  If you wish to make a donation in memory of Marj, please consider the Multifaith Housing Initiative of Ottawa https://www.canadahelps.org/en/charities/multifaith-housing-initiative/or the Unitarian House fund for homeless seniors.

,where friends and family are welcome to post their memories of Marj.

Share Your Memory of
Marjorie
Upload Your Memory View All Memories
Be the first to upload a memory!